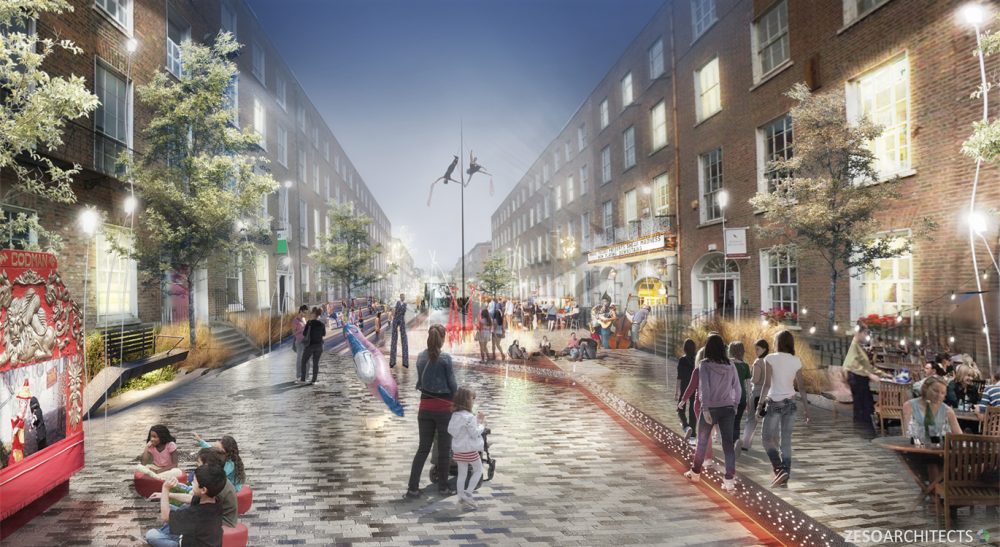 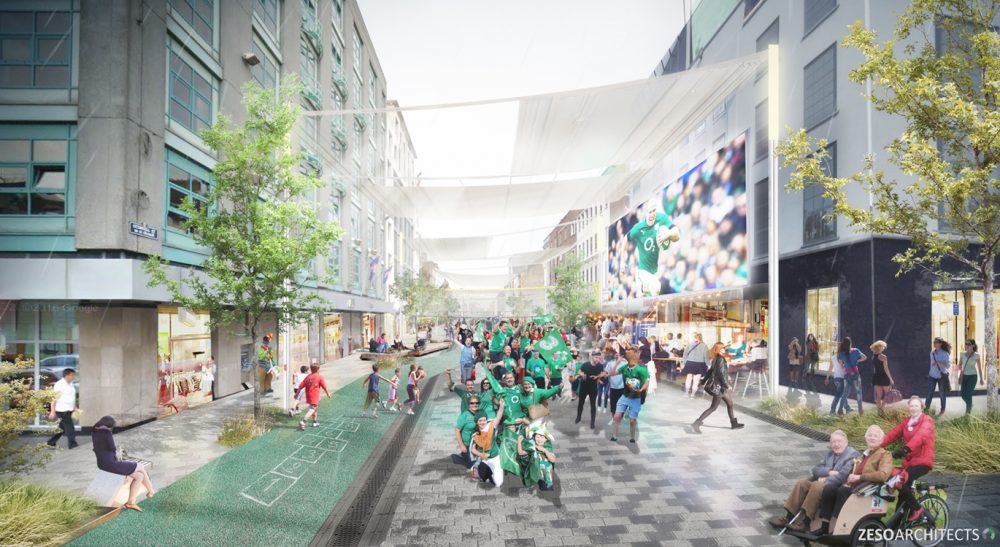 ZESO Architects have been working together with John Moran, former secretary general of the Department of Finance, and the #liveablelimerick group on alternative visions for what Limerick’s new urban identity can be. See the full article from the Limerick Leader here.

A little over fifty years ago, Copenhagen had a very heated public discussion, along the same lines as the issues being discussed in Limerick over the last few weeks.Similarly to O Connell Street in Limerick, a key centrally placed commercial street “Strøget” -in the heart of old Copenhagen – was being considered as a possible first trial for a pedestrian shared space for the city.

Jan Gehl, a Danish architect, and Alfred Wassard, Copenhagen’s ‘mayor for town planning’ from 1962–78, had a vision for the street – and for the city – a “people first” pedestrian zone in the heart of the existing urban fabric.

The idea was highly controversial – with a large group of people arguing that Danes did not have the mentality for “public life” as envisioned by such a street. The local shops and businesses argued strongly that the restrictions on traffic would scare away business, and that the area would be a ghetto for antisocial behavior.

Alfred Wassard, even faced death threats such that on the opening day, police were heavily present to prevent assassination attempts and to keep noisy car driving protestors at bay. The more exclusive shops on the east end of the street were particularly opposed to the change, and they tried to have the project restricted to its western portion, which was dominated by bars and cinemas at the time.

What an irony then, that now some half a century later, the same shops enjoy Copenhagen’s most sought after retail space.

The project quickly proved a success, and the area soon enjoyed a 35% increase in pedestrian footfall in the first year alone, with boosts in retail sales, café environments and a reinvented vibrant street life at the centre of the city.From its humble beginnings, the pedestrianisation movement expanded, from street to street, and over the course of some twenty years, the network grew from 15,800 square metres of the Strøget, to about 100,000 square metres.

Now, no visit is complete to Denmark without a visit to Copenhagens bustling urban heart.

The pedestrianisation of Strøget in 1962 marked the beginning a major change in the approach of Copenhagen and the Danes to urban life; following the success of the initiative the city moved to place a much greater emphasis on pedestrian and bicycle access to the city at the expense of cars.

For the first time last year, bicycle sensors in Copenhagen clocked a new record: there are now more bikes than cars in the heart of the city. In the last year, 35,080 more bikes have joined the daily roll, bringing the total number to 265,700, compared with 252,600 cars.

This, people first approach, has in turn become internationally influential – and a key part in the export of Danish “liveability” around the globe – a focus which places people first, and seen them top the United Nations yearly – World Happiness Report 2017 – for the last several years ( though placed second to Norway this year)

Copenhagen in particular, has the eyes of the world looking at how successful a “people first” approach can be – urban spaces thrive, people are happier, businesses grow, and cities become real players in attracting global talent and foreign investment to their hinterland.

The same mechanism, can be used to boost limerick’s identity on a global scale.

An inspired Limerick City, putting people first across the board –which is the key to Copenhagen’s success. It’s the small things, the thoughtful bench, the well placed café table, the playground with coffee kiosk, the accessible water, that makes Copenhagen work. There’s no reason why Limerick can’t take all these elements to help people use the city and do it even better.

Europe’s next “place to be”.

We see, to begin with, a vibrant public heart, a series of exciting themed spaces, an urban gesture representative of the diversity and future identity of Limerick – something that will make the world take notice – and want to come to visit.

– Dream of the “impossible” Limerick – and then make it work.